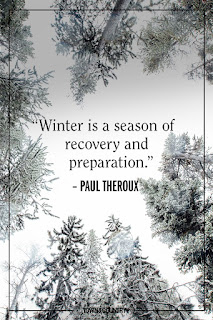 In this winter season we join with plants and animals and act as they do, resting and taking time to prepare for spring.  Enjoy the Magic of the Season.
Posted by Kat Vilim at 1:52 PM No comments:

Since California has been experiencing an unprecedented number of massive wildfires this year, I wanted to share this hopeful article with you.

"Satellite images from 5 major wildfires in the United States revealed that corridors around beaver habitat stayed green even after a wildfire."—


Squawk, squawk, squawk!! Those familiar cries made me crane my head upwards to get a glimpse of the green-bodied parrots. I was not disappointed. There they were, flying together over a large Sycamore tree. My friends, the wild parrots of Malibu, had survived the wildfires. Indeed, they seemed to be flourishing!

November’s wildfires and February’s floods had kept me away from my favorite Malibu campground for almost a year.  Finally, in June, 2019 the Leo Carrillo State Park campground reopened. So, I took a trip up Pacific Coast Hwy to see how the place had fared, and to see if my friends, the wild parrots, were okay. Leo Carrillo State Park is in the northernmost part of Los Angeles County, bordering Ventura County where the Woolsey fire had moved across the hills, and burned all the way down to the beach in some spots.

Considering how intense the wildfires had been, I really didn’t see as much destruction to the campgrounds as I had expected.  The tall, non-native yellow rye grasses that usually cover the hillsides were burnt out. Without rye grass interference, native bunch grasses were growing in their place. Yellow blossoms of Spanish mustard were waving in the breeze, softening the hills. And Spring rains had helped wildflowers bloom: monkeyflowers, yellow daisies, poppies and lupines.

Fire is a two-edged sword: Native chaparral plants and animals are adapted to survive fires when fires occur naturally.  The problem comes when humans appear on the scene. Our mismanagement and haphazard fire prevention methods have taken a toll on these wild places.  I was happy to see that despite the human-caused wildfires, this place was thriving.

It took many man-hours to turn the park around. Crews were still working when I visited, cutting dead branches away with chainsaws, and tilling soil in trails. The visitor’s center had to be rebuilt. Restoring water to the campgrounds had posed some difficulties, and was still a work in progress.
The fire took out many of the mature Live Oak trees, though some of them will regrow from still-living roots. The California Sycamore trees (Platanus racemose) with their palm-like leaves were thankfully passed over. This is good news for the Nanday or Black-headed parakeets that make nests in Sycamore’s hollows.

Sumac was another wildfire survivor. Everywhere I looked black branches were sticking up from a base of new green leaves. The Sumacs were re-growing from something called a burl. The burl acts as a survival mechanism, storing water and energy. When the branches are burned, the burl gets the message to get busy, sending new growth up through the ashes.  Many chaparral plants have burls like the Sumac.

The fire cycle is an endless loop of burning and recovery. It only takes a couple months for new growth to surface, then the plants will mature and eventually feed the next fire. Plants, insects and animals of the chaparral absolutely depend on regular fires. After a fire, birds of prey can now find lizards, snakes and rodents in the newly open ground, and deer have new vegetation to forage. One of my favorite stories of fire-dependence is that of the Fire Beetle. This beetle will only lay eggs on a recently-singed branch! They gather in groups, sensing fire even miles away. Without wildfires, there is no mating.

There are some native shrubs that need fire in order to release or trigger seeds; these plants are called pyrophytes. One example is Manzanita (Arctostaphylos glandulosa). The seeds of this shrub will lie on the ground and will not sprout until they feel the extreme heat of fire, even if they have to wait 100 years!

In addition, many wildflower seeds require fire to germinate. In the spring following a fire, native chaparral wildflowers appear in amazing displays.  Of these, only a few can be found at any other time.  This means much of the native chaparral’s most beautiful blooms are seen only rarely.  Their seeds can lie dormant for 100 years, unseen by us.  (This means there are still a lot of wildflowers this writer has never seen.)

Squawk, squawk, squawk! I think my friends, the wild parrots, were a bit annoyed with the large number of visitors to the campground. They had gotten very used to having the place to themselves while the park was closed. As the park was recovering, I felt as though Nature had given my soul renewal, as well, and I was now ready to return to the city feeling more balanced.

People come to the Santa Monica Mountains to be with nature, to get away from the concrete jungle that is Los Angeles. They know wildlife lives here, too, that squirrels will be their neighbors, and that coyote & owls will call out in the night.  But there are many critters that are rarely seen, even by old-timers. Sometimes it’s because they are nocturnal.  Other times it’s because of dwindling population from loss of habitat or poisonous rodenticides. Some animals avoid humans altogether by living in the less populated parts of the mountains. Then, there are critters we can’t see because they are camouflaged. You can be looking right at them and not even know it. So it is with Invisible Birds.

Invisible birds, are so rarely seen, so how do you know they are there? Why, by their calls.

Listen to Call of theVirginia Rail, from Cornell Macauly Library

The Virginia Rail (Rallus limicola) and the Sora Rail (Porzana carolina) are marsh birds found at the Malibu Lagoon. “Thin as a rail,” the Virginia Rail has a compressed body, an interesting survival adaptation by this elusive wetland bird, that makes it difficult to see them as they slip through the marsh tule reeds (Scripus acutus Tule).

The Virginia Rail prefers to evade intruders by running through marsh vegetation where it is safe rather than flying away. When it does fly, it only flies a few yards before disappearing again, once more invisible in the marsh.

Listen to Call of the Sora Rail, from CornellMacaulay Library

The Sora Rail (Porzana carolina), also found in the Malibu Lagoon, is a small, secretive bird. It’s wonderful, musical “whinny call” can be easily heard from deep within the tule reeds, but trying to see the little bird is a different matter as it is well camouflaged in the reeds. “sor-AH” “sor-AH”

Listen to Call of Common Poorwill, from Cornell Macaulay Library

Another Invisible Bird is the Common Poorwill (Phalaenoptilus nuttallii).  The Common Poorwill is not a rail and is not a marsh bird. They are nightjars of the arid West, the smallest members of their family. They prefer the dry grassy Malibu canyons like Zuma and Trancas Canyons. Their cry of “poorwill” is familiar to residents there.

It requires keen perception to see the Common Poorwill, as they look just like “Dirt and Twigs”. Great camouflage! They won’t run from humans if you happen to approach; they assume you can’t see them!

Along with the sounds of Hawks, Owls and Coyote, the calls of these birds join in the magical symphony of the Santa Monica Mountains. Whether seen or unseen, bird calls give us an unmistakable sense of place.  You don’t have to see the Invisible Birds of Malibu to know where you are.. It is all in their song~

There’s a symphony going on where you live, too.  Take a moment to stop to listen and enjoy each member of the orchestra. We’d love to hear ‘what’s playing’ in your back yard.

A society grows great when old men plant trees whose shade they know they shall never sit in.” 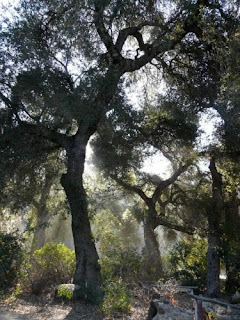 Get in the Dirt


It's windy, and gusty winds are chilly.  But we are patient, waiting with our small dog, for the winds to die down so we can photograph the blooms of California poppies (Eschscholzia californica) Waving orange in the sun, poppies stretch by the thousands up hills and ridges welcoming spring.

This year visitors are in for a treat. They can experience the Super Bloom, which was brought on by heavy rainfall this winter.  For the next 3 weeks visitors can still view the Super Bloom. To best enjoy the poppies, time your visit for mid-day on a sunny day because the petals close up when it is overcast or during late afternoon.

Another place to go to view wildflowers is the Saddleback Butte State Park, (17102 E. Ave. J in Lancaster) which is a bit higher up. Besides the wildflowers mentioned at Antelope Valley, they also have Joshua trees flowering now.

North of Mojave, visit Red Rock Canyon State Park, on California Highway 14. It has a few slopes heavy in poppies, coreopsis and desert sunflowers and patches of other flowers, according to an email Wednesday from a state park ranger.

Saddleback Butte State Park, also in Lancaster, is a little drier and higher in altitude than the reserve. Still, wildflowers such as fiddlenecks, coreopsis, Mojave suncups, woolly daisies and red maids are blooming, according to the park's Facebook page. You can also see Joshua trees flowering as well. The park is at 17102 E. Ave. J in Lancaster.